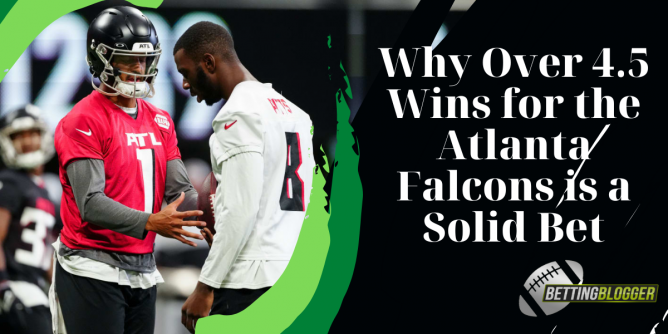 The Atlanta Falcons will not be a good football team in 2022, that is for sure. Yet their win total of 4.5 seems a bit low.

Atlanta traded star quarterback Matt Ryan to the Indianapolis Colts and will run with Marcus Mariota and Desmond Ridder. The new QB combo is far from elite, but Mariota has won games in this league before. In addition, its defense should be good enough to help steal a few games and help the Over 4.5 (-120) cash at the season’s end.

The Falcons Offense Could be Sneaky Good

Mariota spent last season with the Las Vegas Raiders, learned under Derek Carr, and was a big part of their short-yardage team. He will be a threat with his legs, but he believes his passing has also improved, which will be needed for the Falcons to succeed.

Although Mariota will not win any games singlehandedly, Atlanta has built a solid core around him. The former second-overall pick will be able to throw the ball to rookie Drake Landon, 2021 first-rounder Kyle Pitts, Cordarrelle Patterson, and Bryan Edwards. The offensive line will also be good enough to help Mariota with time to find the openings.

The Falcons are reeling from the loss of receiver Calvin Ridley, who is suspended for the entire 2022 NFL season. But they still have Pitts, one of the best tight ends in football and a safe option for Mariota.

“For a guy his size, with his catch radius, his length, and his ability to get in and out of cuts, [Pitts] makes it easy on us,” Mariota said in his press conference. “His body language as a receiver makes it simple. You know when he’s coming in and out of breaks. We know when he’s going to break down. It’s really a credit to him. I think that, as we continue to jell, our chemistry will continue to grow.”

Marcus Mariota lobs it up for Kyle Pitts over Mykal Walker in coverage (📽️ @bkfox5sports) pic.twitter.com/xwRL3r8U1h

Possible Wins for the Falcons

Another reason I like the Falcons to win five games or more is their soft schedule.

Atlanta will play the Carolina Panthers twice and should win one of those games. The Birds also get the Cleveland Browns in Week 4 without Deshaun Watson, so that is another possible win.

Week 3’s matchup against the Seattle Seahawks seems like a very winnable game after the Seahawks traded franchise QB Russell Wilson. In Week 11, the Falcons host the pedestrian Chicago Bears, while the Washington Commanders and Pittsburgh Steelers in Weeks 12 and 13 could be a split. Finally, Atlanta ends the season in Week 18 against a Tampa Bay Buccaneers squad that could be resting players ahead of the playoffs.

If the offense comes through and the team takes advantage of several “easier” games, the Falcons should go over 4.5 wins in 2022.

Can the Falcons shock the world? Check out the 2023 NFC Championship Odds and Predictions.