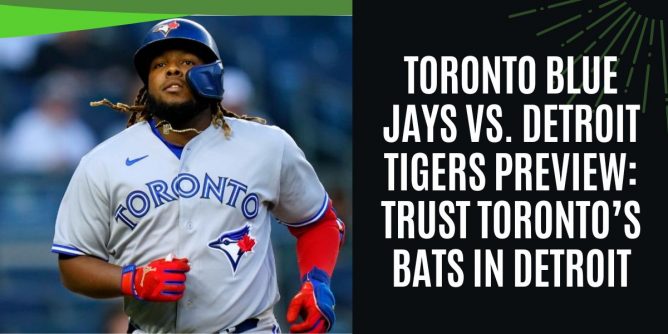 The Toronto Blue Jays and the Detroit Tigers begin a three-game set in Detroit on Friday night.

Toronto has been playing better baseball as of late, winning seven of its last 10 games. The Blue Jay offense has flexed its muscle so far in June, scoring 55 runs since the beginning of the month.

After a beat-down in the Bronx at the hands of the New York Yankees, the Tigers took two road games from the Pittsburgh Pirates.

Jose Berrios will take the mound for the Blue Jays tonight and will look to build upon his stellar seven-inning effort where he gave up two runs on three hits against the Minnesota Twins last week.

Elvin Rodriguez did not have fun in the Bronx in his last start. The rookie right-hander was clearly tipping pitches against the Yankees and was hammered by their potent offense, surrendering 10 runs in 4 ⅓ innings. Tonight he will face another dangerous threat in the Blue Jays.

Let’s take a look at the angles for the first matchup this season between these two teams.

It’s Hard to Trust Berrios, but the Tiger Offense is Reeling

The Tigers like to strikeout, and that is not very good when you cannot score runs. They have scored the least runs (158) in baseball and have the 14th highest strikeout rate.

Javier Báez signed a six-year, $140 million contract with the Tigers, but his lack of production has to be frustrating for the organization and Detroit fans. Báez is batting a measly .138 and has one of the highest whiff rates (53%) in the league.

The Tigers hoped the former Cubs and Mets shortstop would bring some offensive firepower to the squad, but at this point in the season, it seems as though Báez will not find consistency at the plate.

Berrios has not had a lot of quality stars this season, but the Tigers provide an encouraging opportunity for the former Twins pitcher to find his form. He struck out 13 against Minnesota in his last start.

The Blue Jays have not been the world-beaters they were largely expected to be. Their top four of George Springer, Bo Bichette, Vladimir Guerrero Jr., and Teoscar Hernandez is healthy, but they have not been able to score runs at a high rate, placing 16th in the league.

Vladdy G’s production is down from last year’s monstrous campaign, and although he has not been as dominant, he is still hitting the ball hard. His average max exit velocity is in the 99th percentile in the league.

The team up north has hit 21 home runs over their last 10 games. Toronto should mash against the vulnerable Rodriguez, who will still have a bad taste in his mouth after his last dismal performance.

Toronto has also enjoyed playing on the road lately, going 7-1 in their last eight contests.

Although Rodriguez might not give up double-digit runs this time out, he can be expected to still give up a large number. The Blue Jays are -230 on the moneyline, so there is not a lot of value at that price.

Although Berrios could give a few runs, do not expect the Tiger offense to keep up with Toronto’s. The Blue Jays should thump Rodriguez and get out to an early lead.

Take Toronto -1.5 (-130) and lean toward the over of 9 if you do not have confidence in Berrios to completely shut down the Tigers.