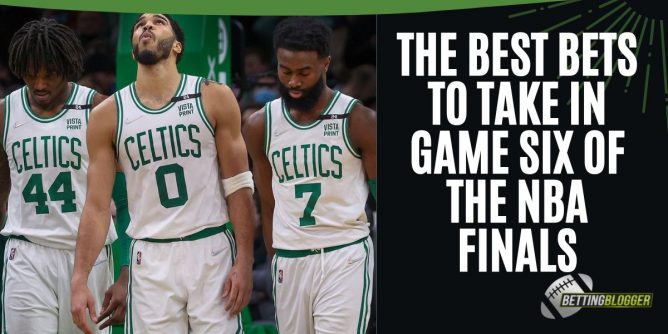 Steph Curry struggles but the Warriors still come out on top

Stephen Curry had previously set an NBA history record with the most consecutive games with at least one three-point make. His streak was put to an end at 233 straight games in game five of the NBA finals. Although Curry struggled with his shot going 0-9 from three-point range, the warriors were still able to cover the 4 point spread. Steph Curry has still been the best shooter these finals hitting 25 threes this series which is more than any other player on the Warriors or Celtics.

Curry is known to keep shooting and has the mindset to have big bounce-back games after a poor shooting performance which is why my pick of the game is Curry over 4.5 total threes made. The line is set at -118.

Besides game five, Curry has hit this over in every game of the series. In-game one he hit 7 threes, in-game two he made five, in-game three he had 6 threes, and in-game 4 he had 7 threes.

Curry has been the Warriors leader and front runner for Finals MVP before game five, expect a huge bounce-back game from the lethal shooter.

The NBA world is still waiting to see a Jayson Tatum performance we have been expecting all NBA Finals. Tatum has struggled to find his groove this series and set an NBA postseason record with 95 turnovers.

Jayston Tatum was one of the top players in the league this season averaging 26.9 points with 8 boards and 4.4 assists per game. Tatum is yet to have a monster game and facing elimination will be the ultimate test of the young player’s career.

Tatum has been known to be clutch when facing elimination, in his short career he is 4-1 in-game sevens in the playoffs with the one loss coming to Lebron James which was during Tatums rookie season. Due to Tatums ability to be clutch, another good bet I have is taking Tatum over in points which are set at over 27.5 points at a line of -120.

If Tatum can be the clutch player he is and play his best when his back is against the wall, I see him cruising over 27 points.

The presence of Robert Williams

Robert Williams has served a limited role at the start of the playoffs due to battling off an injury, however, in the last few games, we have seen him get extra minutes and make a huge impact for the Celtics. During the regular season, Williams was the Celtics leading rebounder averaging 9.6 boards per game.

The line is set at over 7.5 rebounds at -134. Robert Williams is an extremely hard-working player with tremendous length. He will fight in the paint as hard as he can to force a game seven.