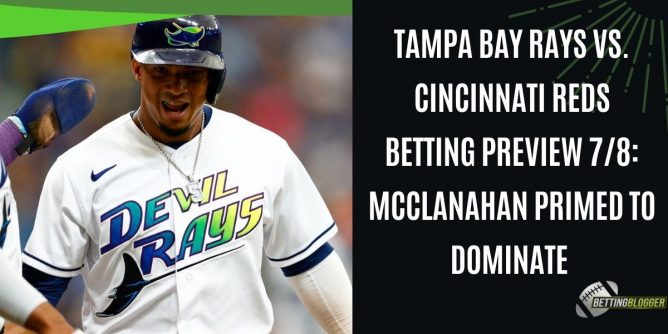 The Tampa Bay Rays and the Cincinnati Reds will square off Friday night in the first game of a three game set at Great American Ball Park.

Tampa heads to Cincinnati after winning their series against the Boston Red Sox. Cincinnati will look to steal some games from the AL Wild Card-leading Rays before they head to the Bronx to face the New York Yankees.

Shane McClanahan (9-3, 1.74 ERA) will toe the slab for the Rays tonight and is primed to turn in another stellar outing in a storybook season. The 25-year-old AL Cy Young favorite is already making history. In McClanahan’s last 10 starts, he has pitched at least six innings, struck out at least seven, and earned fewer than three runs, the longest such streak in AL history and the third-longest in the Majors since 1901.

The Cincinnati Reds will trot out Luis Castillo (3-4, 3.09 ERA), who is having a solid season. Castillo will be an intriguing trade target at the deadline, as the Yankees, Minnesota Twins, New York Mets, and San Diego Padres are drawing interest.

Let’s dive into the angles for this interleague matchup.

What Can’t McClanahan Do?

McClanahan is on top of the world right now. The southpaw does not just stop good teams, he mows them down. He has surrendered only three runs to the Yankees in three starts, and was stellar against the potent Toronto Blue Jays’ offense in his last outing, giving up one run on three hits over seven innings of work.

It will be another day at the office for McClanahan tonight, as the Cincinnati Reds are a strikeout-heavy team and are missing right-handed hitting in Aristides Aquino and Tyler Stephenson.

The losses of Brandon Lowe, Mike Zunino, Manuel Margot, and budding superstar Wander Franco for the majority of June have not prevented the Rays from scoring runs. They have scored 39 runs in their last six games.

Tampa has found lightning in a bottle in Isaac Paredes. The rookie was let go by the Detroit Tigers in a trade that sent Austin Meadows to the Motor City, and the Tigers are certainly missing him now. Meadows cannot stay on the field and Paredes is providing production in an area the Rays lack: power. Paredes is swinging at nearly 75% of balls in the upper two thirds of the strike zone this season, which can equate to his high fly-ball tendency.

The Rays should score enough runs against the walk-heavy Castillo and give McClanahan the support he deserves, but does not need.

The Cincinnati Reds are playing better baseball, but they stink at home. Great American Ball Park has been a prison for Cincinnati, not a home, as they only have 14 wins.

McClanahan is just too good and the Cincinnati Reds offense is just too compromised. Trust the Tampa ace to turn in another outstanding performance and open the series with a win.