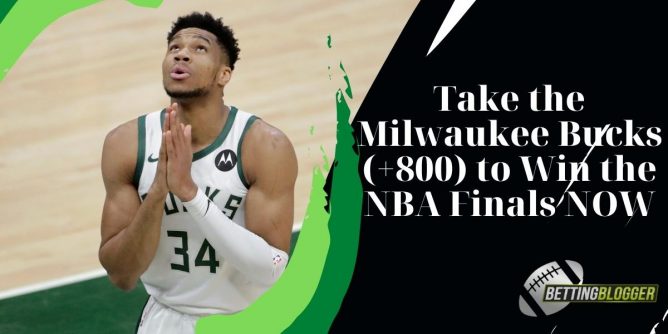 Right off the bat, I want to make it clear that this is me, the author, speaking from my personal standpoint— hopefully, there are no issues with this. Great, let’s get started.

I have no idea what the bookmakers are thinking, awarding the Milwaukee Bucks the fifth-best odds of +800 to win the NBA Finals. They have the best player in the entire world, a man by the name of Giannis Antetkounmpo, an assortment of the best role players the National Basketball Association has to offer, a championship-winning coach, and experience on basketball’s biggest stage.

Now, of course, the elephant in the room is that they are tied 2-2 in their current series with the Boston Celtics heading back to TD Garden for Game Five, but that should scare nobody. Ignore the headlines on other sports betting news blogs, the Bucks, along with Bucks bettors, are in a position of power for the foreseeable future.

The Milwaukee Bucks are the steal of the playoffs

Futures odds are assigned simply by deciding which team has the best chance to pull off a particular outcome: in this case, winning the NBA Finals. Milwaukee won last year’s championship over the Phoenix Suns in six games, closing them out on the back of 50 points and 17 rebounds from Antetokounmpo.

Because future odds have to do with probability, let’s start with the current series. Milwaukee and Boston have gone back-and-forth so far, and the Celtics have done a tremendous job defending the Greek Freak. However, they have also benefited from the Bucks’ horrendous three-point shooting, and a once-in-a-lifetime performance from 35-year-old Al Horford, which will not be replicated for the rest of these playoffs, or potentially, forever.

Jaylen Brown has also been on-and-off, and in the next game that he is off, the Celtics are almost guaranteed a loss.

Giannis, meanwhile, is still yet to produce a truly great game, which is assuredly coming in one of the upcoming affairs. Either these two occurrences happen in the same game and the Bucks get a blowout victory, or they happen on two different nights and the Bucks surely advance. Regardless of which way it happens, the defending champs hold a decided advantage— time to look at the next round.

The Miami Heat are floundering, even if they are up 3-2 in their series with the Philadelphia 76ers. They are adjusting their rotation seemingly on the fly, have completely benched usual starter Duncan Robinson, and they too have been off from three-point land in a few of their recent games.

The Sixers, meanwhile, are likely to lose, but if they somehow advance, will be disadvantaged by the fact that their best player and MVP runner-up Joel Embiid is severely injured and just not himself. Basically, as long as the Bucks make it out of the current round, they are practically guaranteed to make the Finals.

Checking in out West

The Memphis Grizzlies are down 3-1 to the Golden State Warriors and are likely to be the victim of a gentleman’s sweep, but on the off chance they make it, they will likely be without Ja Morant for the rest of the playoffs, leaving them without a superstar to match-up against Giannis.

The Warriors themselves could force the Bucks to downsize and create some defensive mismatches, but their cast of stars have been off of their game from outside and are proving prone to physical intimidation by aggressive defenses.

The Dallas Mavericks could give the Bucks a run for their money, but they have offensive inconsistencies of their own and would be brutalized on the boards by Milwaukee’s outstanding length. A lot of their wing players are also subpar perimeter defenders, which would allow the Bucks to seek them out and torture them in isolation.

Phoenix is the best on-paper matchup, but their secondary star, Chris Paul, goes missing too frequently, and they have an inferiority complex going against Giannis, who absolutely dominated them in last year’s title match.

Any way you slice it, Milwaukee has an advantage over every team left in the playoffs; giving them such low odds to win the Finals is an insult to them, but a gift to bettors.