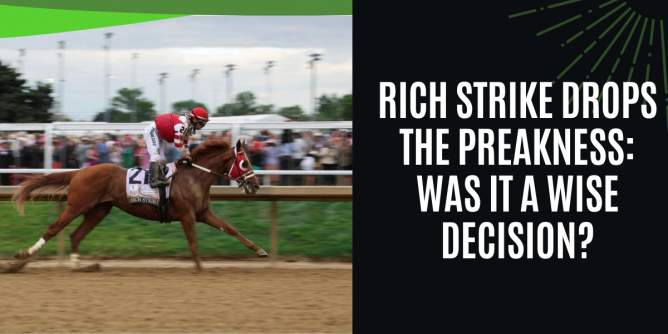 The racing world felt a little stunned when Kentucky Derby winner Rich Strike’s trainer announced that he would be bypassing the Preakness Stakes in order to rest his horse and point for the Belmont Stakes.

Both of those years came on the backs of controversial Derbies involving the first place finisher being disqualified; indeed, when Mandaloun’s trainer Brad Cox elected to opt-out of the Preakness, he was not yet known to be the official 2021 Kentucky Derby winner.

Many racing fans have been debating the wisdom of Eric Reed’s choice. While of course Reed’s decision has already been confirmed and we of the racing public have no influence on the training of his horse, we can look at a few factors which may have affected the choice. On one hand…

While the Kentucky Derby has the richest winning purse of any of the Triple Crown races, the Preakness also offers more than a million dollars in prize money. Major training operations such as those run by Todd Pletcher and Steve Asmussen are regularly involved with the richest races on the planet, but Eric Reed is a small-time trainer.

Rich Strike was one of two graded stakes winners Reed has ever trained. Network television may show the glitz and glamor of racing’s grandest events, but for everyday trainers based at obscure tracks, the opportunity to run for a seven-figure prize may be life- and career-changing. In addition to prize money, a win in the Preakness Stakes along with the Kentucky Derby would make Rich Strike potentially a very valuable stallion prospect after he retires from racing. Colts with multiple grades I wins are highly sought after a stud, and Triple Crown race winners even more so.

The competition as a stallion is quite fierce, particularly when considering that Rich Strike does not have the most spectacular bloodlines (being by Keen Ice, who stands for a mere $7500), but winning at least two-thirds of the Triple Crown.

Put simply, many racing fans believe Rich Strike to be a fluke, and a product of the hot Kentucky Derby pace falling apart. A good follow-up race in the Preakness would stamp Rich Strike as a legitimate leader of his division, and earn him the respect of the racing audience.
On The Other Hand…

Epicenter, the Kentucky Derby runner-up and post-time favorite, looks to re-establish himself as the top three-year-old in the Preakness. He will be joined by Simplification, who closed well to finish fourth in the Derby; Early Voting, whose speed figure in the Wood Memorial was higher than most others recorded by three-year-olds this spring; and Secret Oath, the dominant Kentucky Oaks winner. The competition looks to be slight in number but heavy in quality, and Early Voting’s additional weeks of rest make him an especially bold threat.

There is no doubt that the pace scenario in the Kentucky Derby unfolded in a way that favored a deep closer like Rich Strike. Summer is Tomorrow set incredibly fast early fractions, and Crown Pride, Zozos, and Messier sizzled along with him.

Although the Preakness will not be void of speed, considering that Early Voting is a confirmed front runner and Epicenter has been known to lay close to the pace, the pace setup at Pimlico is unlikely to be as tailor-made for a horse with Rich Strike’s running style as the Derby was.

This is, perhaps, the most important factor at play. Trainer Eric Reed, in his announcement, stated that he wants to do best by his horse. Rich Strike’s races have been fairly well spaced out throughout his career, and Reed knows him better than anyone.

He is keeping an eye on his horse’s future, both in terms of getting into the 2022 Belmont Stakes odds by TwinSpires, as well as later success, health, and safety.

Would Rich Strike have been able to win the Preakness and take Triple Crown glory? That is a question that we will never have the answer to; however, in keeping his horse’s well-being in mind, Reed may well be set up to show, later on down the road, what Rich Strike is really capable of.