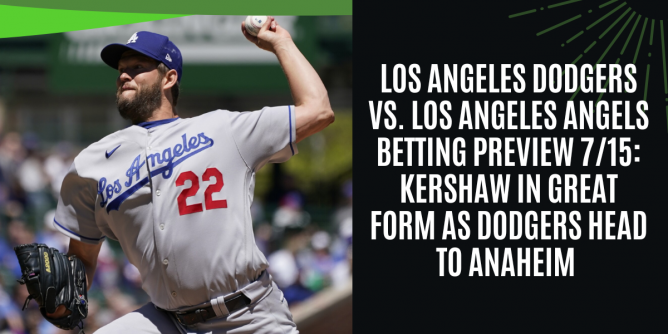 The NL West-leading Dodgers have been on fire to start July, going 11-2. Tyler Anderson added another stellar performance to his breakout season against the St. Louis Cardinals on Thursday, blanking the Cardinals over six innings.

Clayton Kershaw (6-2, 2.40 ERA) will toe the slab for his 12th start Friday night. Kershaw missed five weeks with a lower back injury earlier this season, but the 34-year-old has shown no signs of slowing down, turning in several vintage outings. The three-time Cy Young winner will look to dominate a reeling Angels squad that has real trouble solving left-handed pitching.

The Angels will turn to Patrick Sandoval (3-4, 2.95), a respectable southpaw. Sandoval impressed in his last start in Baltimore against the Orioles, surrendering one run and five hits across 6.1 innings.

If Shohei Ohtani is not on the mound, the Angels probably will not win, as they have dropped 11 in a row in which the 2021 AL MVP has not started.

Let’s take a look at the angles for the second and final edition of the Freeway Series for the 2022 season.

Get Out of the Dodgers’ Way

The Dodgers are flexing their muscles through the dog days of summer. A three-headed monster at the top of the order of Mookie Betts, Trea Turner, and Freddie Freeman, will make any opponent squeal.

Betts and Turner will start for the NL All-Star Team at Chavez Ravine next week. It has been business as usual for Betts and Turner. Mookie already has 20 home runs, and Turner remains one of the most dynamic, effective players in the game. The 2021 batting title winner has the highest wRC+ (134) in the NL among shortstops.

Freeman was one of the bigger snubs for the All-Star Game. The perennial MVP candidate is in the top three percent of the league in xwOBA and xSLG. Freeman rocks. He deserves to be an All-Star.

LA was shaky throughout June, but they have rebounded in a big way, jumping ahead to a 9.5-game lead over the San Diego Padres. The Dodgers’ success has been buttressed by elite, ruthless starting pitching from Tony Gonsolin, Anderson, and of course, Kershaw.

These guys are good. The pitching staff has the second-best team ERA (3.01) in baseball, is ranked third in hits per nine (7.25), and averages the least amount of walks (2.50). Dave Roberts will hope this rotation holds up in October when it matters the most.

There is not much to say about the Angels. They’re just not very good. Mike Trout and Ohtani are just rotting away in Anaheim, and things just cannot seem to get any better.

The Angels rank in the bottom third of the league in hits, and have hit only seven home runs in July. Seven!

Trout, Ohtani, and Taylor Ward, who has a .888 OPS, are the lone bright spots for an Angels organization that should be light years ahead of where they are now.

The signing of Anthony Rendon, who has played 155 games in three seasons, has been a disaster, taking a flier on Noah Syndergaard was impractical, and the rotation/bullpen is extremely thin.

Kershaw should tear apart the Angels tonight and close out a outstanding first half of the season with a win. Trout is probable with back spasms, but even if he is out there, it will not make a difference.

Back the Dodgers -1.5 (-120 at Caesars Sportsbook) in this interleague matchup.

Check out more MLB picks and predictions on Betting Blogger.