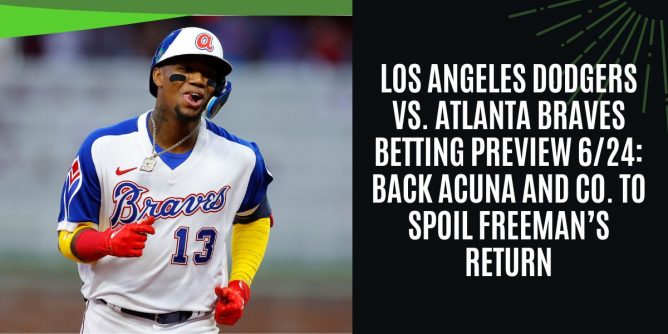 The National League West-leading Los Angeles Dodgers will continue their road trip against the Atlanta Braves in the first game of a three-game weekend series at Truist Park.

Freddie Freeman will return to Atlanta for the first time since winning the 2021 World Series. The 2020 NL MVP will be presented with his World Series ring and will hopefully receive a hearty welcome back from Braves fans.

Julio Urias (4-6, 2.56 ERA) will look to lead the Dodgers to their fourth straight win, while Ian Anderson (6-3, 4.35 ERA) hopes to build off of a strong no-run performance against the Chicago Cubs last week.

Los Angeles received a major blow to their lineup when superstar slugger Mookie Betts was placed on the IL with a cracked rib injury. He is expected to be out through the end of June. Having healthy and productive seasons out of Trea Turner, Will Smith, and Freeman, is still an obvious luxury.

The Braves got off to a scintillating start in June, winning their first 14 games. They now sit four games back of the Mets in the NL East, making up 6.5 games from the end of May.

Let’s take a look at the angles for tonight’s rematch of the 2021 NLCS.

The Braves have only lost three times in June. Led by perennial All-Star Ronald Acuna Jr., the ascension of Dansby Swanson, and the home run-hitting prowess of Austin Riley, Atlanta is well-positioned for another deep postseason run.

Atlanta has the most home runs (108), total bases (1,068), and is tied for the most doubles (134) in the NL. Between Acuna, Swanson, Riley, Matt Olson, Travis d’Arnaud, and Marcell Ozuna, the Braves have launched 52 long-balls.

Urias has fared well against the Braves in the regular season, posting two wins and a 1.80 ERA. However, these Braves are pummeling lefties this campaign, sporting the second-best OPS (.817).

The Dodgers’ young pitching sensation has given up three runs in his last three outings, so he could be in for some regression against a surging Atlanta offense.

Can the Braves Trust Ian Anderson?

Consistency is hard to come by for the Atlanta right-hander. He has had some gems, but he has also had some stinkers this season.

Although Anderson’s WHIP (1.39) is below-average and he gives up hard hit balls, opposing offenses are hitting .248 against him, and he is a reliable changeup that is striking out 23% of batters.

The Braves are 9-4 in Anderson’s 13 starts. I have confidence in the Braves to give Anderson a healthy cushion, and with a strong bullpen behind him, which is first in the NL in ERA (3.09), Atlanta should open up the series with a victory.

I expect a motivated Braves team to show Freeman what he is missing, even though he is very much enjoying his time on a winning Dodgers squad.

Back the Braves (+115 ML) to shine bright against the Dodgers.