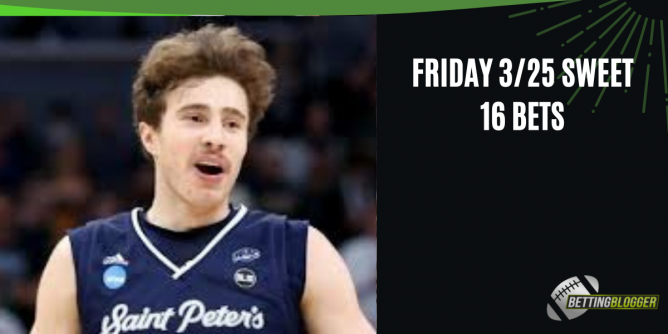 Four Sweet 16 games with four potential upsets. Three double-digit seeded teams and only one top seed playing; it’s going to be a fantastic evening of college basketball. Here are the bets to place on the Midwest and East Regional Sweet 16 games.

Purdue hasn’t been the consistent team we’ve been looking for all season. But they’re hitting their stride at the right time.

They easily handled Yale’s defense, and they scored over 70 on the Texas Longhorns which many teams in the Big 12 struggled to do.

This is also a giant mismatch not only in seed but in size. Trevion Williams is 6’10” and would be the tallest player that Saint Peter’s has if he played for the Peacocks. Unfortunately, he selected to go to West Lafayette instead of Jersey City.

Williams though doesn’t even start. Even though the Peacocks will play inspired, eventually 7’4” Zach Edey will be too much. They also don’t have the size at the guard position to guard Jaden Ivey.

It’s just a really bad, unfortunate matchup for a really good Peacocks squad. Purdue will handle this game, and play the winner of the blue blood UNC v UCLA game. In the only four seed vs one seed game in these two regions that played out as expected, Providence will face a very hot Kansas team. Kansas has won seven games straight, their last loss coming at TCU on March 1st.

Kansas though showed some weaknesses last week against Creighton as they barely squeaked out a win against the Blue Jays who were missing their star point guard and their seven-foot center.

Providence meanwhile has proved the doubters wrong as they beat South Dakota State in the first round, a trendy upset pick on a 20 game win streak. Then, they absolutely dominated the Richmond Spider after they upset Iowa, the hottest team in the country entering the tournament. Al Durham and his supporting cast have been shooting the lights out, including Noah Horchler’s 55% from three-point land in his last two games.

The star player for the Friars is big man Nate Watson who can dominate David McCormack on both ends. If Providence can stay out of foul trouble, Kansas may struggle. Though they may win on the backs of Braun and Agbaji, seven points is a lot, and the reverse line movement only wants me to put even more on Providence’s spread. This was a tough one, but I’m predicting UNC’s collapse. Hubert Davis is coaching in his first tournament while Mick Cronin takes the same starting lineup from last year’s Final Four into this contest.

RJ Davis has been hot, but I haven’t seen him put together this many consistent shooting performances in a row for me to trust him. Brady Manek has more experience, but I think UCLA’s athletic lineup can shut him down from the perimeter.

I predict Armando Bacot meeting his match with the size of UCLA inside, and I don’t see UNC coming back from a deficit. They’re too young still and inexperienced in big moments for me to think they even have a shot.

There’s a possibility they win this, which is why the spread is small, but take the safe pick. We know what UCLA is, and we have absolutely no clue which UNC team shows up to Philly on Friday. This pick has a little bit to do with the reverse line movement in favor of the Hurricanes, but after watching them absolutely dominate Auburn, I don’t see them losing any time soon.

Both teams can’t rebound but hustle hard. I just think that Miami’s age and ability to hold onto the ball better than the Cyclones will be the difference.

It’s common knowledge that scoring 70, sometimes even 60 is enough to beat Iowa State and I think that Kam McGusty and Isaiah Wong will go and get their shots.

They’re also a solid three-point shooting team who has only made four threes in two combined games so far.
The big play here for Iowa State will be getting Charlie Moore in foul trouble and attacking him with speed. The Combination of Brockington and Hunter isn’t ideal for the Hurricanes so if both of them can get going, they can pull it off.

However, I trust Coach L and the Canes here to get it done and set up the biggest game in their program’s history.

More on this game here.