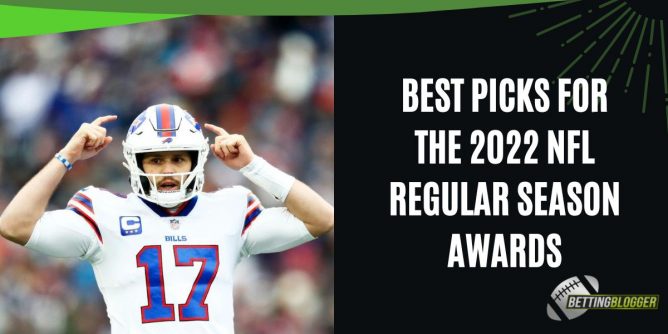 My Pick for NFL MVP is Josh Allen who is already the Favorite for this award in Vegas at +700 odds. The reason for this pick is simple, Josh Allen has gotten better every season he has played in the NFL and I believe he will bring Buffalo a Superbowl this upcoming season.

He had a controversial loss in the playoffs last season to the NFL Kansas City Chiefs due to the Overtime rule, which later the league changed that rule. He threw for 4,407 yards, 36 touchdowns, 15 interceptions, and a QBR of 60.7. This was By far his best season in the league but expect even more out of the elite quarterback this upcoming season.

NFL Offensive player of the year

For NFL Offensive player of the year, my pick is Justin Jefferson at +2000 odds. The favorite for this award is Jonathon Taylor at +1000 odds.

The reasoning for my pick of Justin Jefferson is because I believe this is the year where he proves he is the best receiver in the league. Jefferson has been an elite receiver ever since his rookie season, but I believe this year he proves to be the best of the best.
Last season Jefferson played his second season in the NFL racking up 108 catches, 1,608 receiving yards, and 10 receiving touchdowns.

NFL Defensive Player of the Year

My pick for Defensive Player of the year is Micah Parsons at +1000 odds. The favorite for this bet is Myles Garret at +700 odds.
Parsons showed everyone in his rookie year that he is a force to be reckoned with as he totaled 13 sacks. The 13 sacks are tied for 3rd all-time in history from a rookie player. Parsons will continue to develop and has the potential to be one of the best players in the league for years to come.

NFL Offensive Rookie of the Year

My pick for Offensive Rookie of the year is Kenny Pickett at +600 odds. Pickett has the best chance to win offensive rookie of the year because he has a great chance to be the Steelers starting quarterback by the first game of the season. With a veteran wide receiver presence Dionte Johnson and Chase Claypool, he will be able to put up big numbers.

NFL Defensive Rookie of the Year

Aidan Hutchinson is my pick for Defensive Rookie of the Year at +550 odds. He showed us at Michigan just how good of a defensive player he is and why he was a top pick in this year’s draft. He is a huge upgrade for the Detroit Lion’s defense.

NFL Comeback Player of the Year

My pick for comeback player of the year is Jameis Winston at +550 odds. After being the number overall pick and winning a national championship at FSU, Jamies has never exactly proved his worth, but I expect his best season yet and lead the New Orleans Saints on a playoff run.

NFL Coach of the Year

My pick for coach of the year is Mike McDaniel at +1600 odds. I expect the dolphins to have a great season next year under new head coach Mike McDaniel. I believe that Tua will take a huge step this season with the addition of Tyreek Hill at wide receiver.