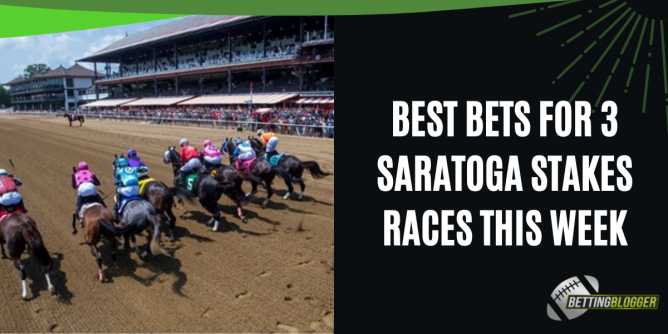 Saratoga Racetrack is the place to be this week. Saratoga will have seven quality stakes races, with five of them being graded stakes. The Grade II Jim Dandy, a prep race for Saratoga’s Traverse Stakes, is the granddaddy of them.

While the entries for this weekend’s events – Jim Dandy Stakes, Grade I Alfred G. Vanderbilt Handicap, Grade II Bowling Green Handicap, and Grade II Amsterdam Stakes– are not completely set, there are three quality Stakes events during the week.

The Grade II Honorable Miss Handicap starts things off Wednesday. They will have the $200,000 Birthstone Stakes on Thursday and the Curlin Stakes on Friday.

The Honorable Miss Handicap is a $200,000 Grade II stakes that is slated for six-furlong and is for fillies and mares 3-years-olds and upwards. This four-horse field will run the fourth race on Wednesday’s card. Frank’s Rockette, Bella Sofia, Amadeville, and Kimari are the runners.

Frank’s Rockette (2-1 ML) got the inside post. The 5-year-old mare has finished second in each of her two races this year, losing to Bella Sofia by a nose in the Grade III Vagrancy H Stakes at Belmont a little more than two months ago,

After outdueling Frank’s Rockette in the Vagrancy, Bella Sofia (1-2 MLheld off down the stretch in the Grade II Bed o’Roses stakes at Belmont on July 10. The 4-year-old filly has six wins and one second in eight starts with four graded stakes victories.

Armadevil (12-1 ML) has won two straight races and has not finished worst than second in eight career starts. But the 4-year-old filly has yet to participate in a graded stakes race, and this is her first start outside of Ohio.

Kimari (4-1 ML)has one victory in three starts this year and hasn’t raced since finishing fifth in the Derby City Distaff on May 7. The 4-year-old daughter of Munnings is a versatile horse who has five wins and a third-place finish in seven starts on an all-weather track. She has four victories in 10-stakes events, including a win in the Grade I Madison Stakes.

Prediction: As the morning line indicates, the Honorable Miss Handicap appears to be a three-horse race, with Armadeviil being far outclassed. While Bella Sofia deserves to be the prohibited favorite, I like Frank’s Rockette to pull the upset. Frank’s Rockette is extremely consistent, likes this distance, and has raced extremely well at Saratoga.

The $200,000 Birdstone stakes is a mile and three-miles race for 4-year-olds and upwards. Five horses will run in the fifth race on Thursday’s card.

Fearless (4-5 MLI) is making his debut at Saratoga and only second start in New York, coming away victorious in Grade II Brooklyn Stakes at Belmont Park on June 11. The 6-year-old gelding has hit the board in each of his last 10 meets with four victories, all of which were handicaps or graded stakes.

Lone Rock (6-5 ML) has gotten better as he has become more seasoned. The 7-year-old gelding has finished in the money in just 23 of 41 career starts, although 19 of those times have come in his last 24 outings. He faded to third in Grade II Brooklyn Stakes on June 11, three lengths behind Fearless.

Original Intent (12-1 ML) has finished first or second in each of his last two outings though both of those races were starter allowances races. The 7-year-old gelding has hit the board in 20 of 45 starts with 10 victories. He is 0-for-2 in stakes races.

Shooger Ray Too (12-1 ML)is slated to run for the third time in the last three months with a second and fifth place finish. The 5-year-old horse finished fifth in a $35,000 optional claiming race at Parx on June 28. His only other time racing at Saratoga was when he finished second in the Birdstone Stakes last year.

Prediction: Fearless is clearly the best horse in the field, and I like the Luis Suez/ Todd Pletcher working together, they have a 17% win/rate over the last year. Granted, Lone Rock is really not that far behind Fearless due to his recent good stretch, and he will likely try to control the pace of the race. Since it is pretty much all or nothing for Lone Rock, and I believe Fearless will come out on top, I believe there is some value with a Fearless and Portos, or even bigger longshot Shooger Ray Too, exacta bet.

The $135,000 Curlin Stakes is a one-and-eighth mile race for 3-year-old who have not won a graded stakes at a mile long. The nine-horse field will run the seventh leg of Friday’s program.

Western River is coming a five-and-one half furlong in a $127,000 allowance race where he was the favorite in a six-horse race. The son of Tapit has two victories in seven races, with both coming this year.

Gilded Age has finished in the top 3, with two victories, in each of his last three races on American Soil. He is coming off the best race of his career, where he rallied and used a strong stretch kick to go from sixth to first to win an $80,000 optional claiming event at Churchill Downs.

A.P’s Secret hit the board for the first time since the first few days of 2022 when he finished third in the Texas Derby on May 30. All four of his top 3 finishes have come in nonstakes or listed stakes events.

Make It Big hasn’t raced since finishing a disappointing 10th over 16 lengths behind the winner in the Sam F. Davis Grade III at Tampa Bay in February. It also ended his three-race winning streak and marks the only non-money finish in four starts.

Wolfe Country is the most experienced runner though he just broke his maiden the last time out at Churchill Downs. The son of Medaglia D’Oro has hit the board in four of eight starts.

Creative Minister is making his sixth start this year. Not only does the colt have considerable experience, but he has arguably faced the stiffest competition. Creative Minster has four top-3 finishes and finished fifth in the Belmont Stakes and third in the Preakness.

Be Better has taken massive strides, winning both of his starts in 2022 after finishing third in his debut last year. He talked and pulled away to win a $60,000 allowance race at Monmouth earlier this month. The son of Uncle Mo appears to be a stalker.

Artorius showed much improvement in his second career race at Belmont last month.. He is 2-1-1-0 in his career and appears to be a strong closer.

Prediction: The Curlin Stakes has the potential to be an incredible race. While the morning line is not out yet, I am going with Golden Glider to top Creative Minster. I also like Make It Big, Be Better, and AP’s Secret to be used in exotic bets, with Western Reserve being the wild card.

The Jim Dandy is the granddaddy of the weekend’s nine stakes (Del Mar has 4) events. The $600,000 one-and-one-eighth mile race is for 3-years-olds. While there is not a great deal of info about the 2022 Jim Dandy event, I do like Epicenter to win and Early Voting to hit the board.