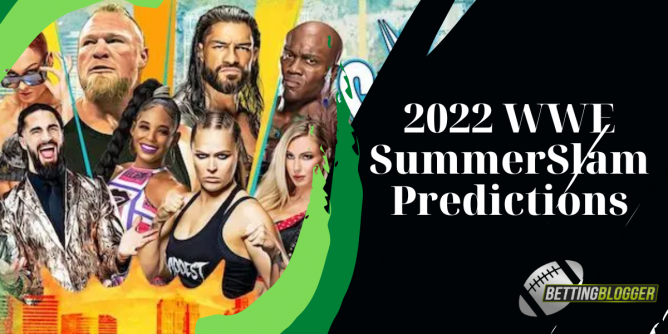 The WWE Universe will roll into Nissan Stadium in Nashville, Tennessee for SummerSlam Saturday night. This will be the first SummerSlam not held in the month of August.

For the first time in WWE history, a premium live event will be held without former owner Vince McMahon. McMahon, who was the chairman and chief executive officer of WWE since 1982, resigned on July 22.

Wrestlers from Monday Night Raw and Friday Night Smackdown will compete at the event. SummerSlam is considered the second biggest event on the WWE calendar behind WrestleMania.

As WWE Superstars take over Music City, let’s take a look at the matchups for “The Biggest Party of the Summer.”

WWE is building this matchup between Lesnar and Reigns to be the last installment in this storied, seven year chapter between two of the biggest names in the history of the company. Roman Reigns, the “Tribal Chief,” will emerge as the better man at the end of SummerSlam and bring an end to the long-standing, bitter feud. Expect the ultimate encounter between Lesnar and Reigns to be an epic clash, full of bloodshed and brutality, for the Undisputed Universal Championship.

Pat McAfee, former NFL punter for the Indianapolis Colts, and the current color commentator for SmackDown, is competing in his second PPV match for WWE. Coming off a win against Theory at this year’s WrestleMania, McAfee is primed for another victory, this time against Happy Corbin, who happened to be McAfee’s roommate when both were members of the Colts in 2009.

With the rich backstory to this feud, McAfee will secure the win against Corbin in what should be one of the most engaging matches of the night.

Look for Bobby Lashley to successfully defend his United States Championship against Theory to conclude this two-month long rivalry. Theory, the current Money in the Bank briefcase holder, might decide to cash it in during the main event between Lesnar and Reigns and become the youngest world champion in history, sending rippling effects throughout WWE.

Jeff Jarrett, WWE Hall of Famer, and one of the greatest superstars in history, will be serving as the special guest referee in this intriguing encounter between two of the very best tag teams in the business.

If the two teams can transcend what they did at Money in the Bank earlier this month, then anticipate witnessing a showdown for the ages with a little fun added from Jarrett. Expect The Usos to continue their dominant title reign with a win against The Street Profits and remain at the forefront of the lackluster tag team division.

Related: Check out our list of the Top 10 Wrestling Entrances of All-Time!

There is no doubt that Liv Morgan’s breakthrough moment at Money in the Bank, which involved her winning the Women’s Money in the Bank ladder match and then later cashed it in against Ronda Rousey to become champion, was a proud time for the women’s division.

Having Rousey win back the title would put a dent in Morgan’s run which only began earlier this month. Though Rousey is currently a babyface, dethroning Morgan after such a brief reign would not be profitable for WWE. It would only diminish Rousey’s fan favorite status. Liv Morgan should be able to pick up the win in their second encounter.

It was a year ago when Becky Lynch made her suprise return to WWE and beat Belair in 27 seconds to become the Raw Women’s Champion. Now a year later, Belair is once again going into SummerSlam as the champion with Lynch as her opponent.

In a rematch from this year’s WrestleMania where the two women put on an instant classic, expect the same to happen in Nashville with Belair defeating Lynch to retain her title.

Paul recently signed a multi-event contract with WWE late last June after teaming up with The Miz at WrestleMania in a win against Dominik and Rey Mysterio. Following the match, The Miz turned on Logan Paul and delivered his signature “Skull-Crushing Finale.” Now Paul is back and looking for revenge against The Miz. Paul, the famed YouTuber, should be able to defeat the “A-Lister” in what could be one of the most compelling matches of the night.